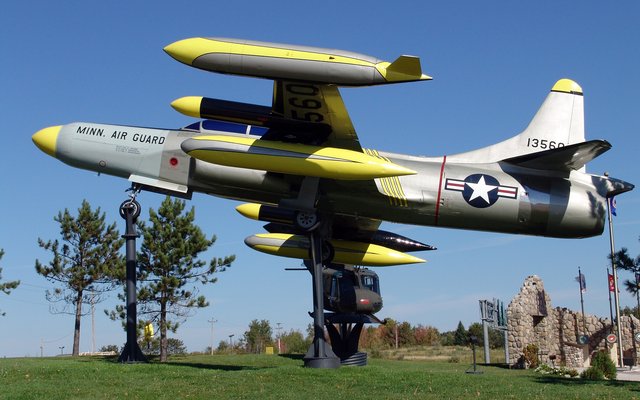 The Iron Range Veterans Memorial—located in Chisholm next to the entrance to Minnesota Discovery Center—was dedicated on October 14, 2000. That date is noteworthy, for it marks General Dwight D. Eisenhower’s birthday (1890) and Nazi Germany’s withdrawal from the Geneva disarmament conference and the League of Nations (1933).

Behind this trio is a second row of eight service flags representing the Air Force, Army, Coast Guard, Marines, Merchant Marine, National Oceanic and Atmospheric Administration, Navy, and Public Health Services. A rock wall that resembles the remains of a bombed out shelter encloses the memorial. Through a window in the wall, observers can spy the Iron Man statue, which signifies, in part, the area miners’ contributions to President Roosevelt’s famed “Arsenal of Democracy.”

The memorial is flanked on either side by federally loaned military vehicles. To the left is a Minnesota National Guard UH-1H Iroquois “Huey” helicopter while a M60A3 tank rests to the right. Post members estimated that the memorial’s expansion cost nearly $130,000, primarily with in-kind services and additional donations.

In 2012, Navy veterans were feted with the addition of an 11-ton anchor from USS Mount Baker (AE-4). The anchor is surrounded by a ring of projectiles. The memorial’s most recent addition—a granite monument listing Chisholm’s fallen soldiers—arrived in 2014. The monument had been displayed previously in the courtyard between Chisholm’s city hall and public library.